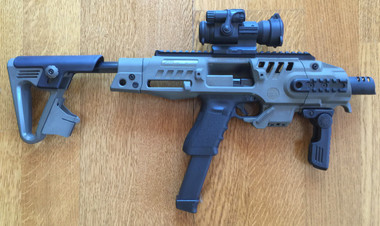 The Glock 18 is essentially similar, except our 17 is not select fire. Full auto only:

The Glock 18 is a selective fire variant of the Glock 17, developed at the request of the Austrian counter-terrorist unit EKO Cobra. Originally produced in 1986, this machine pistol–class firearm has a lever-type fire-control selector switch, installed on the serrated portion of the rear left side of the slide. With the selector lever in the bottom position, the pistol will fire fully automatic, and with the selector lever in the top position, the pistol will fire semi-automatically. The firearm is typically used with an extended 33-round capacity magazine, although other magazines from the Glock 17 will function, with available capacities of 10, 17, or 19 rounds. Early Glock 18 models were ported to reduce muzzle riseduring automatic fire. Another compensated variant was produced, known as the Glock 18C. It has a keyhole opening cut into the forward portion of the slide, similar to the opening on the Glock long-slide models, although the Glock 18 has a standard-length slide. The keyhole opening provides an area to allow the four, progressively larger (from back to front) compensator cuts machined into the barrel to vent the propellant gases upwards, affording more control over the rapid-firing machine pistol.

All prices are in USD. Copyright 2021 FullAutoExperience.com. Sitemap | Shopping Cart Software by BigCommerce