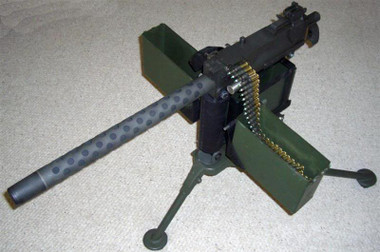 Available in either M1919A4 tripod mounted or M1919A6 rifle configurations.

The M1919 Browning is a .30 caliber medium machine gun widely used during the 20th century, especially during World War II, the Korean War, and the Vietnam War. An air-cooled development of the standard US machine gun of World War I, the John M. Browning-designed M1917, the M1919 saw service as a light infantry, coaxial, mounted, aircraft, and anti-aircraft machine gun by the U.S. and many other countries. Although it began to be superseded by newer designs, such as the M60, in the later half of the century, it remained in use in many North Atlantic Treaty Organization (NATO) countries and elsewhere for much longer.

The M1919 is very similar in design to the larger Browning-designed .50 caliber (12.7mm) M2 Machine Gun, especially in its "heavy-barrel" or HB version, still in NATO service. Many M1919s were rechambered for the new 7.62×51mm NATO round and served into the 1990s, as well as up to the present day in some countries. The United States Navy also converted many to 7.62mm NATO, and designated them Mk 21 Mod 0; they were commonly used on river craft in the 1960s and 1970s in Vietnam.