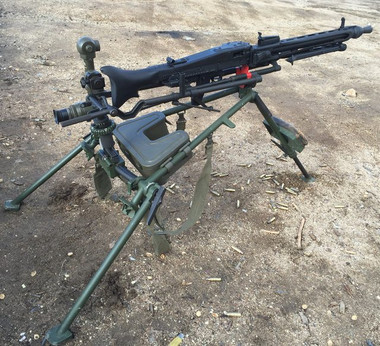 Available either tripod mounted, anti aircraft mounted (outdoors only) or shot from the bipod.

The MG 3 is a German general-purpose machine gun chambered for the 7.62×51mm NATO cartridge. The weapon's design is derived from the World War II era MG 42 universal machine gun that fired the 7.92×57mm Mauser round.[3]

The MG 3 was standardized in the late 1950s and adopted into service with the newly formed Bundeswehr, where it continues to serve to this day as a squad support weapon and a vehicle-mounted machine gun. The weapon and its derivatives have also been acquired by the armed forces of over 30 countries. Production rights to the machine gun were purchased by Italy (MG 42/59), Spain, Pakistan (MG 1A3), Greece,Iran, Sudan and Turkey.[4]