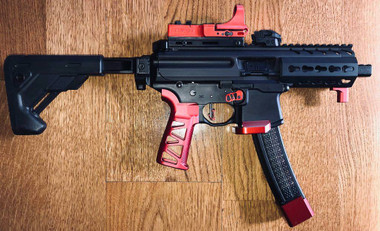 The SIG Sauer MPX is a gas-operated gun primarily chambered in 9×19mm rounds. It is a weapon of Swiss design and is the first submachine gun to feature a fully closed and rotating bolt system, This is to enhance the safety of the user. It was designed in 2013 and released to the general public in 2015. It features a SIG Sauer short stroke push-rod gas system to reduce recoil and improve the reliability of the weapon. The weapon features a system that allows for conversion from 9mm to .357SIG or .40S&W.