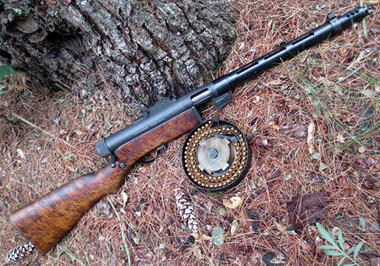 The Suomi KP/-31 (Suomi-konepistooli or "Submachine-gun Finland", literally: "Machine-pistol Finland") was a submachine gun (SMG) of Finnish design used during World War II. It was a descendant of the M-22 prototype and the KP/-26 production model, which was revealed to the public in 1925. The Suomi-konepistooli KP/-31 is often abbreviated to Suomi KP.

The Suomi KP/-31 is regarded by many[3] as one of the most successful submachine guns of World War II, also the soon developed 71-round drum magazine was later copied and adopted by the Soviets for their PPD-40 and PPSh-41 submachine guns.[4] The accuracy of the Suomi was superior to that of the mass-produced PPSh-41,[4] thanks in part to a noticeably longer barrel, with the same rate of fire and the equally large magazine capacity.[4] The major disadvantage of the Suomi KP/-31 was its high production cost.

The M-22 and KP/-26 were made by Konepistooli Oy, founded by Master Armorer Aimo Lahti, Captain V. Korpela, Lieutenant Y. Koskinen and Lieutenant L. Boyer-Spoof. The Suomi KP/-31 was designed by Koskinen and Lahti.